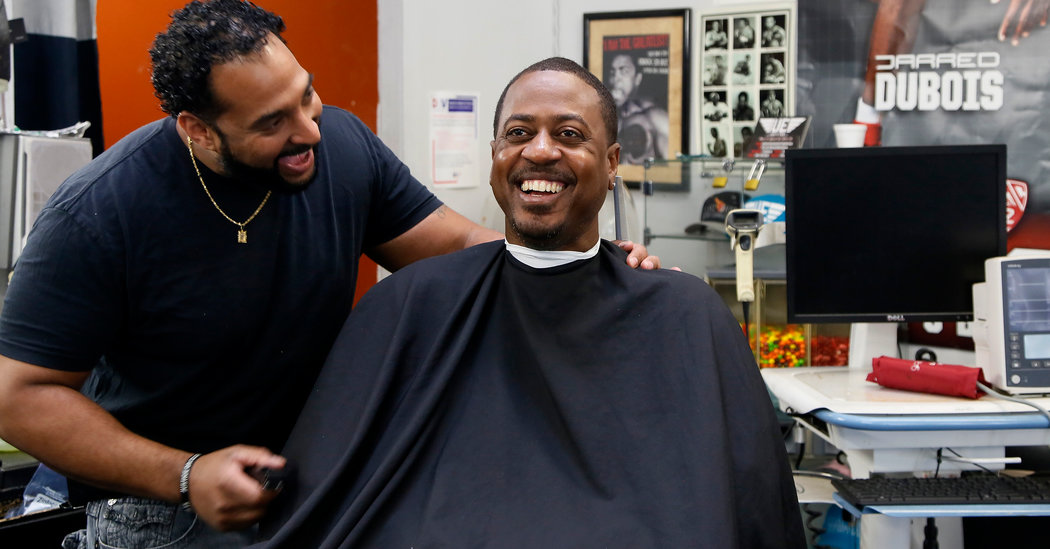 Interesting news from a new study on reducing blood pressure. A few years ago, researchers had trained barbers “to check blood pressure and refer people with high levels to physicians.” It only had a small effect, they thought, because too often the physicians didn’t prescribe blood pressure medication. So this time, researchers tried a different approach:

The control group consisted of barbers who encouraged lifestyle modification or referred customers with high blood pressure to physicians. In the intervention group, barbers screened patients, then handed them off to pharmacists who met with customers in the barbershops. They treated patients with medications and lifestyle changes according to set protocols, then updated physicians on what they had done.

They also tweaked the process to handle the inevitable bumps in the road.

When barbers weren’t consistently screening customers by measuring their blood pressure, pharmacists stepped in to do that. When labs slowed things down, pharmacists brought measuring tests to the barbershops.

It gets better. The rate of cohort retention — measuring how many of the patients remained plugged into the study and care throughout the entire process — was 95 percent.

According to the New York Times, the researchers believed there were several important lessons that could be learned from the results of this series of studies.

Getting barbers involved meant health messages came from trusted members of the community. Locating the intervention in barbershops meant patients could receive care without inconvenience, with peer support. Using pharmacists meant that care could be delivered more efficiently.

I think there’s also a valuable lesson here for Makers All. If emerging tech is going to provide real opportunities to communities that our society has basically written off, we need to plug into the parts of that community that people already trust. Learning complex new tech can be really intimidating, especially because you’re probably going to spend a lot of time falling on your face when you first get started. Feeling safe and knowing there are people who’ve got your back is half the battle. Barbershops and beauty salons, churches — all of these institutions could play an important role.

Community institutions aren’t magic. As the study also showed, it will take the right mix of institutions as well as a feedback loop to tweak the process as we learn what’s working and what’s not. But if we’re smart about how we do it, a community-oriented approach has tremendous potential.

A few years ago, Anil Dash wrote an influential piece advocating for what he called “blue-collar coding”:

High schools have long offered vocational education, preparing graduates for practical careers by making them proficient in valuable technical skill sets which they can put to use directly in the job market right after graduation. Vocational-technical schools (vo-tech) provide trained workers in important fields such as healthcare, construction trades, and core business functions like accounting. For a significant number of my high school peers, vo-tech was the best path to a professional job that would pay well over the duration of an entire career. Now it’s time that vo-tech programs broadly add internet and web technologies to the mix. We need web dev vo-tech…

Put another way, our industry can grow in a very meaningful way by giving lots of young people at a high school level the knowledge they need to learn jQuery straight out of high school, or teaching maintenance on a MySQL database at a trade school without having to get a graduate degree in computer science. That’s not to say that CS students aren’t also important — we’ll need the breakthroughs and innovations they discover. But someone has to run that intranet app at an insurance company, and somebody has to maintain the internal iOS app at a law firm, and those are solid, respectable jobs that are as key to our economy as a 22-year-old trying to pivot and iterate their way into an acqu-hire.

I think this is really smart. The one qualm I’ve had about this idea is that when people use the phrase “blue-collar coding,” there’s often an implicit assumption that blue-collar coding jobs would be silo’d off from the highly skilled developers who create the software, frameworks, etc. that everyone else uses. As Dash himself wrote in a more recent piece:

Applied CS over theory: A lot of yesterday’s computer science programs emphasized abstract concepts that could often be hard to translate into practical impact. Given that more students have access to technology in their everyday lives than ever before, recontextualizing CS education to connect directly to the tools and devices they already use can ensure that what we’re teaching is relevant. By analogy, we’re going to need a lot more electricians than electrical engineers, even if we know that the two related disciplines are both important and valuable.

The problem with this analogy is that nobody expects any electricians to become electrical engineers, just like no one expects some construction workers to become architects.

I think we want to try to build a tech job ladder that’s more like the restaurant industry. It’s not uncommon for a great, influential chef to have started their career washing dishes or peeling carrots and then worked their way up.

I’m not saying blue-collar coders should aspire to be a tech celebrity chef; people should be able to have a great career that affords them a middle-class life without needing a CS degree. But I do think we should build a pathway that’s more fluid and that encourages more mobility.

I haven’t posted anything the last two weeks, and that’s because I’ve been swamped getting a new project off the ground. I’m going to take a number of lessons I learned from the Mixed Reality for All project and turn them into a report on what it will take to make robotics, AIA, mixed reality, and other emerging tech truly accessible to all communities. I’m hoping to finish it by the end of the year. In the meantime, I should be back to regular posting by next week.